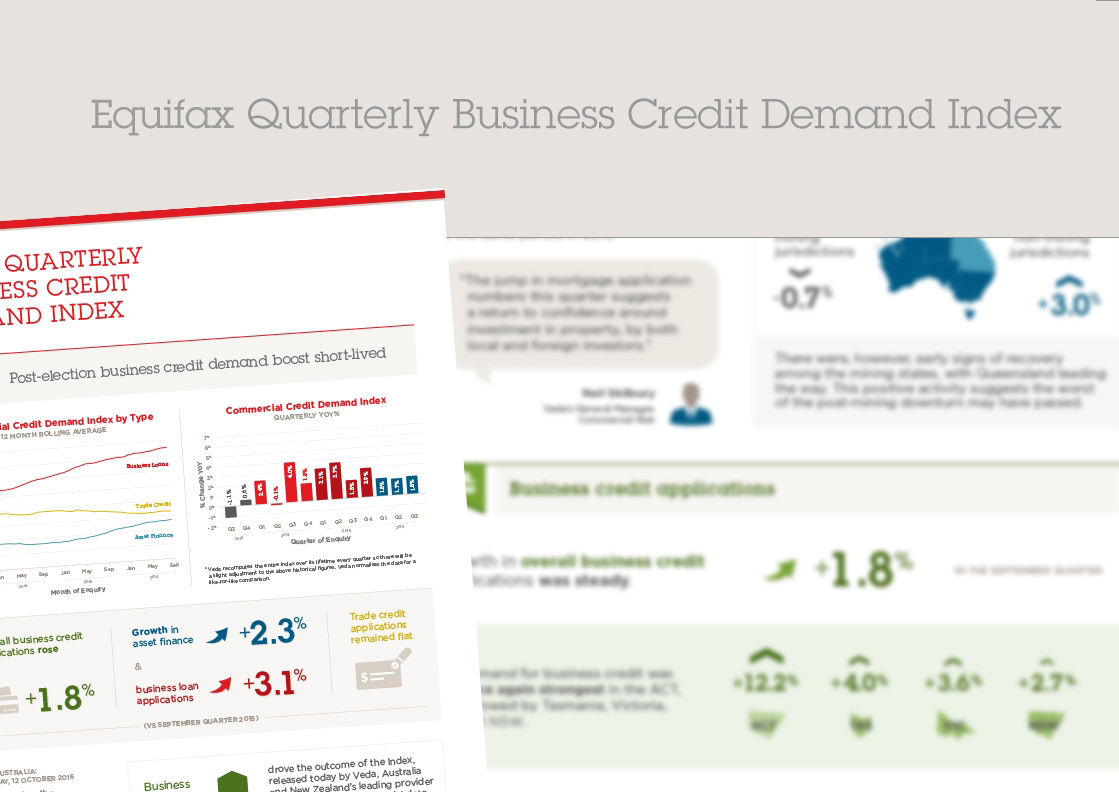 “While asset finance decreased by 2.7%, the decline is on a slower trajectory. The drag on asset finance can be partly attributed to a contraction in autofinance activity.

“The economy is adjusting to life after the mining boom, with the recent lift in business credit demand coming from outside the mining industry. With low interest rates and business confidence rising, the non-mining sectors that are sensitive to interest rates such as retail and housing construction are starting to pick up,” he said.

“Investment prospects in these non-mining sectors are being further stimulated by solid economic growth, business profitability and the recent fall in the Australian dollar.”

Released today, the Veda Business Credit Demand Index has historically proven to be a lead indicator of how the overall economy is performing.

The state most exposed to the mining industry downturn, WA, show a marked improvement compared to the previous four quarters. On the eastern seaboard, NSW has benefited from low interest rates with housing construction picking up.

"Mining states have outpaced non-mining states in trade credit demand, with the strongest growth we have seen since mid-2010.  These states are moving beyond the construction phase of the mining boom into an operational phase and that appears to be fueling increased transations between businesses for goods and services,” Mr Samaha said.

Asset finance applications softened in the September quarter (-2.7%), although the rate of contraction has eased since the June quarter (-4.9%). NSW (+0.7%) and Victoria (+0.5%) were the only states to see an increase in applications.

Within asset finance, commercial rental (+5.8%) and leasing (+1.5%) showed positive growth, while the rate of contraction in hire purchase applications (-1.5%) eased.  Personal loan (autofinance) applications were down (-10.1%). 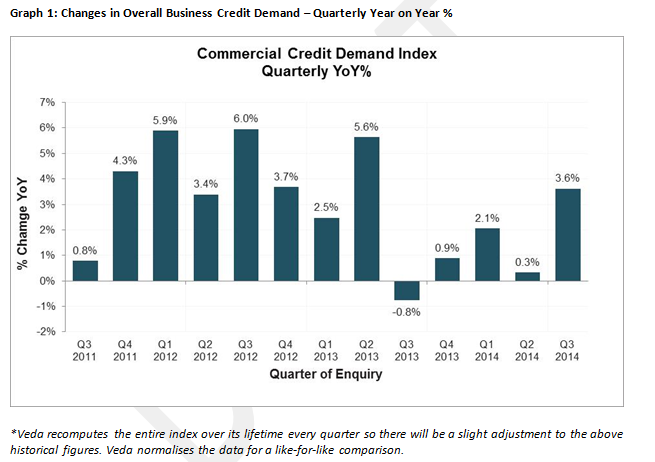 Purpose of Veda Indices releases: Veda Indices releases are intended as a contemporary contribution to data and commentary in relation to credit activity in the Australian economy. The information in this release does not constitute legal, accounting or other professional financial advice. The information may change and Veda does not guarantee its currency, accuracy or completeness, and you should rely on your own analysis and applications. Veda has relied on third party information in compiling the Indices and has not been able to independently verify the accuracy of that information.  To the extent permitted by law, Veda specifically excludes all liability or responsibility for any loss or damage arising out of reliance on information in this release and the data in this report, including any consequential or indirect loss, loss of profit, loss of revenue or loss of business opportunity.